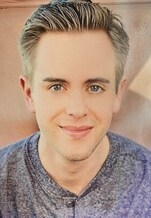 Jackson Koewler was born on April 6, 1991 in St. Louis, Missouri. He passed away in a tragic car accident in Durango, Colorado on June 4, 2021. Jackson grew up in Farmington and graduated from Farmington High School in 2009. He participated in numerous dance and theatrical activities including Mann Dance, Theatre Ensemble Arts, San Juan College, and Sandstone Productions. He graduated with a Bachelor of Science degree from New Mexico State University in 2013. While attending the University, Jackson was a member of the Dancer's Unlimited Company. Following college, he participated in the Albuquerque Little Theatre and Heartstrings Children's Theatre, also in Albuquerque.

Jackson was a shining star. He made friends wherever he went. He was a mentor to drama students, and thrived on any activity related to dance and theatre.

Jackson is survived by his mother, Jeanne Kofron, his father, John Koewler, his brother, Jordan Kofron Koewler, his grandmother, Doris Koewler, aunts, uncles, cousins, and his precious cat, Princess Leia. He will be greatly missed by all who knew and love him.

Jackson's Celebration of Life service is scheduled for Friday, June 25 at 11 a.m. at the First Presbyterian Church, 865 N. Dustin Avenue in Farmington.

Donations can be made to Heartstrings Theater Company. 7400 Coulson Dr.


To order memorial trees or send flowers to the family in memory of Jackson Koewler, please visit our flower store.