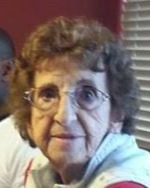 Pauline Jayne Rosten passed away October 22, 2022, in Durango, CO. She was born May 13, 1932 in National Mine, Michigan to Paul and Helen Solka. Pauline married Roy Rosten in 1950 in the home of her parents. After the wedding, she moved in with her mother-in-law, while Roy served in Korea. After moving to Detroit, she worked in the manufacturing industry. The happiest moments of her life were the birth her four boys: Craig (Leta) in 1952, Kevin (Kristi) in 1955, Keith (Barbara) in 1958 and Kurt in 1964. The family moved to Colorado in 1973 and spent 7 years in Leadville. Pauline enjoyed sports and attended all the sporting events for the boys, loving every minute of it. Her marriage to Roy later ended in divorce and Pauline moved about Colorado living in Parachute, Colorado Springs and eventually Durango. Pauline was always cheering for the underdog and would give her last nickel to someone who needed it. She crocheted until the arthritis in her hands prevented it and watched anything on TV that had to do with sports. Pauline wanted to make it to the ripe old age 95, like her mother. You get an A for effort, Mom!  She was preceded in death by her parents, brother Conrad Solka, granddaughter Misty Rosten Bateson, and daughter-in-law Carolee Rosten. Pauline is survived by her sons, her 10 grandchildren, 15 great grandchildren, 4 great great grandchildren, and her brothers, James Solka and Thomas Solka. Per her wishes, no services will be held, and her ashes will be scattered in Michigan at a later date.

To order memorial trees or send flowers to the family in memory of Pauline Jayne Rosten, please visit our flower store.